Throughout its history, the Association has concentrated its efforts on many different areas of interest and initiatives.

Thanks to a generous donation received from the member Giuseppe Caprotti, the Friends of Brera decided to support the room devoted to the founder of the Biblioteca Nazionale Braidense, known as the Sala Maria Teresa, which hosts exhibitions and cultural events. This space now enjoys new lighting through the restoration of the two eighteenth-century Bohemian crystal lamps, the numerous wooden chandeliers and the replacement of the halogen lamps in the bookcases with more efficient LED lighting.

Finally an important contribution has come from the valuable donations received from foundations, companies and private individuals that have made possible the publication of volumes and catalogues, the sustainability of our educational activities and projects, the creation of guides and kits for families, “Brera Musica”, concerts, special events and exhibitions.
Among the most important initiatives in 2018, those by the Fondazione Berti, Banca Intesa and Miel de Botton stand out for their generosity.

In 2017 we were able to finance the new lighting system for Rooms XXXIV-XXXVI devoted to the 18th-century paintings in the collections, following the projects begun in 2015 with the Napoleonic Rooms (Rooms VII, IX, XIV and XV), and continued in 2016 in Rooms XXXIV-XXXVI, devoted to 17th-century paintings. Specifically, new-generation LED lighting fixtures have been installed that have dramatically improved the visibility of the works, all in full compliance with the principles of conservation, lower levels of energy consumption and reduced maintenance costs.

The Association also decided to devote its financial support to the first edition of Museocity, a widespread event devoted to valorising Milan’s museum heritage. Involving more than 70 locations including art and corporate museums, museum homes and artist’s studios, it transformed the city into a large widespread museum with extraordinary opening times, exhibitions, workshops and special initiatives.

In 2016, the audio-visual system and the furnishings of the Sala della Passione were replaced, completely financed by the Presidency in the person of Aldo Bassetti. The project guaranteed perfect visibility, thanks to the large screen, and excellent acoustics, so enabling all members to enjoy the experience of the Tuesday lectures. The complete makeover of the room also made it possible to implement the project “Brera between Art and Cinema”, with the screening of films related to the artworld, and the participation of leading figures on the Milanese cultural scene as outstanding commentators.

Restoration work was completed in the atrium, known as the Atrio dei Gesuiti, the oldest part of the Palazzo di Brera and once its principal entrance. The work, which also refurbished the monuments in the atrium, was carried out thanks to a contribution by Rigoni di Asiago, in collaboration with the Ministry of the Cultural Heritage and Activities and Tourism. The Venetian company undertook to finance the restoration work, returning to Brera and Milan one of the most representative corners of this monumental complex.

The important year-long restoration work was completed on Antonio Canova’s bronze statue of Napoleon as Mars the Peacemaker and its base in the centre of the Courtyard of Honour at Palazzo di Brera.
The work was made possible through the generous contribution of Bank of America Merrill Lynch, whose Art Conservation Project supports non-profit institutions in preserving works of particular significance for the cultural heritage and art history.
The restoration work, devised and directed by Dr. Daniele Pescarmona for the BSAE Superintendency of Milan, was essential because the surface of the statue had been damaged by chemical-physical alterations due to weathering and air pollution, in addition to static damage visible in the flaking and loss of fragments of the marble astragal.
The work was done wholly on site within transparent structures – with the invaluable contribution of the architects Mario Bellini and Italo Lupi – enabling visitors to observe the work as it progressed to a specific request by the Bank of America Merrill Lynch. 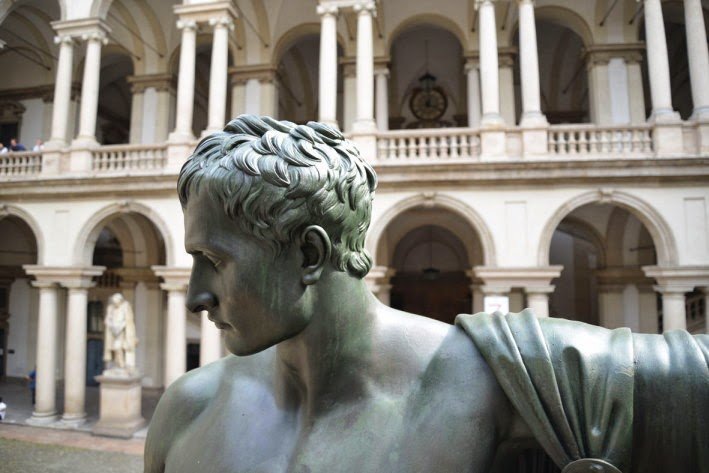 At the behest of Pietro Consagra (Mazara del Vallo 1920 – Milan 2005), one of his most precious sculptures, the “Cangrande” Wall (1977) was added to the collections of the Pinacoteca di Brera.
The Pinacoteca drew on the contribution of the Friends of Brera Association and Ennio Brion for the complex work of transporting and assembling of the Wall (weighing 10 tons), the architect Ruggero Moncada di Paternò for its display, the Galleria Tega for maintenance costs and Zeta-Cube for lighting.

The work in red marble, imposing and transitory in its acrobatic equipoise, constitutes an important example of a central theme in the artist’s overall artistic achievement: the relationship between sculpture and urban spatiality. Although made in 1977, it remains very timely by its provocative sense of the fantastic, the invented and the unattainable that it manages to insert into our increasingly technological and computerised society. The work is located on the ground floor of Palazzo di Brera, in the entrance hall adjoining the Courtyard of Honour as one enters to the right.

In September 2013 the new entrance gate to Milan’s Botanical Garden, located in Via Fratelli Gabba, was inaugurated. Designed by Ruggero Moncada di Paternò and made by Filippo Orsi Mangelli Alverà in memory of his mother, it was strongly backed by the Friends of Brera and in particular the president, Aldo Bassetti, in agreement with the University of Milan, which manages the Botanical Garden.
Clean and restrained in form, it offers a vision of the plants that are the heirs to those of the Jesuits’ “garden of simples” and the specimens cultivated for the students of medicine and pharmacy in Enlightenment Milan, with the water tanks and greenhouses improperly described as “by Piermarini”, besides hosting educational activities and guided tours for the public and schools.

This year saw the start of our collaboration and support for the digitisation project of Leonardo’s Last Supper funded by the Banca Popolare di Milano. This made it possible to electronically archive all the historical and scholarly documentation relating to the restoration work carried out on Leonardo’s masterpiece, so making it available to scholars and restorers in future generations.

The Municipality of Milan awarded the Certificate of Civic Merit to the Friends of Brera Association, with the following citation:
“Founded in 1926 in the name of art, the Friends of Brera Association has been distinguished in recent years as one of the city’s most active and prestigious associations. Now numbering no fewer than 850 members, it is a source of pride for Milan. Thanks to it the Pinacoteca has been able to count on very important donations, continuous restoration work and a tireless educational, editorial and conference activity. The Friends of Brera have brought adults, children and adolescents closer to art with competence and passion, while also promoting projects of effective integration in favour of foreigners.”
7 December 2005
The Mayor
Gabriele Albertini

2004 saw the restoration of the extraordinary “Pietà Rondanini” exhibited at the Castello Sforzesco. Thanks to financing by the Koelliker group, Michelangelo’s poignant last work was first subjected to careful chemical and physical analysis and the glow of its marble restored after being tarnished by atmospheric pollution.

Through an accord with the Friends of the Superintendency and a valuable contribution by Pirelli, the innovative transparent glass restoration laboratory, located on the museum route and therefore visible to the public, has been functioning since 2002.
Designed by Ettore Sottsass, this extraordinary work environment is a mobile structure that houses restoration of large or particularly important works, making the activities of the laboratory an integral part of the museum’s educational and exhibition itineraries.

The work of the Friends of Brera has also given support to other Milanese institutions of primary historical and artistic interest. In 1994, a subscription made it possible to acquire two instruments for controlling the microclimate and monitoring the dust levels in the room containing Leonardo ‘s “Last Supper”. For years the Association has been responsible for the ordinary and extraordinary maintenance of these instruments and has constantly monitored the functioning of their sophisticated technologies.

Since 1987 the Association has been involved in the project for Palazzo Citterio, an 18th-century aristocratic residence located in Via Brera and adjacent to the Botanical Garden, in which it is planned to extend the exhibition spaces of the Pinacoteca di Brera. The new venue will recount the art of the early 20th century and Milanese collecting, as well as hosting works from the Gianni Mattioli Collection for two years.

The Friends of Brera, by assigning the renovation of the building to the noted British architect James Stirling, have played an active part in the delicate management of relations between the Ministry of the Cultural Heritage and the Foundation of the Istituto Bancario San Paolo di Torino for Culture, Science and Art. The Association is the custodian of the archive of the project and has been in charge of its administrative and bureaucratic sides. 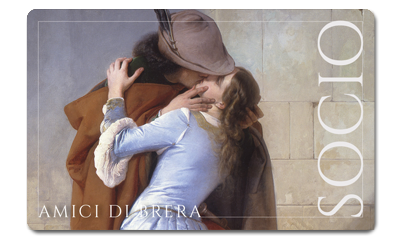